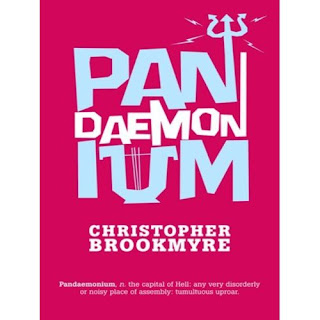 I seldom write fan letters to other authors. Not that I don’t want to; there are lots of wonderful books that move me to admiration, laughter, tears, etc., and I’d love to let the authors of them know that. In some cases, the authors in question are dead, though, which kind of renders a fan letter moot (though I do Say a Word during my evening rosary—that’s my Lenten devotion this year, saying the rosary every night (provided I don’t fall asleep in the middle, but I haven’t yet; lovely, peaceful meditation)). In most cases, though, I just don’t get around to it. You know, busy life, obligations, family, dogs, book-tours, saying the rosary [g], answering the nice messages people send me, etc., etc.

I’ve just finished wallowing in PANDAEMONIUM, pausing occasionally to gasp with admiration at your sheer technical brilliance (we’ll take the tremendous energy, amazing ear for dialogue and eye for social dynamics, and your talent for chronic hilarity (ranging from subtle to belly-laugh) as read). All of which is _nothing_ to my enjoyment of the way your mind works. [g] I couldn’t have done a clearer explanation of just what science _is_ (and how it works) myself–and I do it frequently, what with the appalling state of prevalent ignorance and the many practitioners thereof. And the sheer bloody brilliance, not only of the concept, but the _ending_…!

I’ve been enjoying your books for years, and you’ve been getting better and better, juggling the ideas so deftly with the satire and the plot (speaking of juggling, I adore your magician from THE SACRED ART OF STEALING and SNOWBALL IN HELL, too). This one is Just Great. Thanks so much.

The only real drawback to Brookmyre’s books is that they aren’t all published yet in the US (US publishers in these parlous times fight shy of anything offbeat, like stories written with Scots vernacular—but I sort of don’t think that would be a problem for most of you guys [g]). Still, Amazon.com does have all of them for sale at least in paperback

though I’m displeased to note that they only have PANDAEMONIUM listed in the Kindle edition. (I bought mine in hardcover—I grab Brookmyre on sight—from The Poisoned Pen in Scottsdale; they import a lot of British authors, and routinely carry all of Brookmyre’s books. If you’d like a hard copy (undeniably expensive, but worth it), see

http://www.poisonedpen.com/search?SearchableText=Christopher+Brookmyre .) I’m sure you could get them all from amazon.co.uk, but then there’s the shipping to pay, so it’s pretty much a wash.

(And here’s his website, too, which has brief excerpts from some of his books: