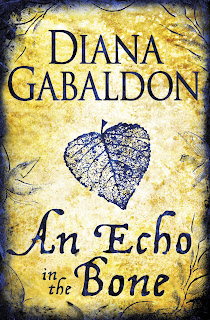 Now, let me note that the UK readers are not left out of the paperback ECHO celebrations! True, British/Australian/New Zealand fans don’t get the famous Green Slime trade paperback, nor do they get the EXILE eight-page full-color excerpt. Nor do you get THE EXILE itself, unless you can convince Orion Books that there is indeed a market for graphic novels on your side the pond. [g] On the other hand…

September 30th heralds the publication of the UK mass-market paperback edition (that’s the smaller size) of AN ECHO IN THE BONE! Besides the very snazzy cover shown above (it’s actually covered with gold flakes, not just yellow; very eye-catching, though not green [g]), you also get a nice chunk of what the UK publisher tantalizingly describes as “end-matter.” [cough]

This is stuff they put at the end of the book, in hopes of providing new purchasers with something special. In this case, UK fans will get:
1) Potted biographies of a number of prominent characters,
2) An essay on the Life and Times of Scotland in the 18th century (not written by me, but a nice job by whoever did write it),
3) _Beautiful_ (and geographically correct!) maps, both of the Scottish Highlands, and of the American Colonies, circa 1776. Aaaannnnddd…

4) An excerpt from Book Eight, which tells you What Happened to Jem in the Tunnel. Which I will give you a small taste of here….

“Hey!” he shouted at the invisible ceiling. “Are there any bats up there?”

Silence. He’d kind of been hoping there were bats. He wasn’t afraid of them–there were bats in the old broch, and he liked to sit and watch them come out to hunt in the summer evenings. But he was alone. Except for the dark.

His hands were sweating. He let go of the metal cab and scrubbed both hands on his jeans. Now he could hear himself breathing, too.

“Crap,” he whispered under his breath. That made him feel better, so he said it again. Maybe he ought to be praying, instead, but he didn’t feel like that, not yet.

There was a door, Mum said. At the end of the tunnel. It led into the service chamber, where the big turbines could be lifted up from the dam if they needed fixing. Would the door be locked?

Suddenly he realized that he’d stepped away from the train and he didn’t know whether he was facing the end of the tunnel or back the way he’d come. In a panic, he blundered to and fro, hands out, looking for the train. He tripped over part of the track and fell sprawling. He lay there for a second saying “Crap-crap-crap-crap-crap!” because he’d skinned both knees and the palm of his hand, but he was OK, really, and now he knew where the track was, so he could follow it and not get lost.

He got up, wiped his nose, and shuffled slowly along, kicking the track every few steps to be sure he stayed with it. He thought he was in front of where the train had stopped, so it didn’t really matter which way he was going–either he’d find the train or he’d find the end of the tunnel. And then the door. If it was locked, maybe–

Something like an electric shock ran right through him. He gasped and fell over backward. …

(You _were_ paying attention, weren’t you, when I told you I was really Black Jack Randall…?)

www.poisonedpen.com or call them at 480-947-2974. Normally, they can get UK books without much trouble, and I’d be delighted to stop by the bookstore and sign them for you.

Tagged as: Diana Gabaldon AN ECHO IN THE BONE UK Mass-market paperback