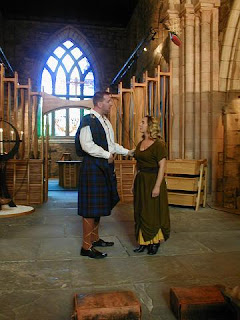 Just a quick report from the Aberdeen front: The official “live” launch of OUTLANDER: The Musical took place yesterday, as part of the Aberdeen Tartan Day festivities, and a Really Good Time was had by all, or so I’m told. [g]

Here’s the Official Tartan Day Photo (as taken by the Official City of Aberdeen Photographer—meaning it’s in focus) of the scene in St. Nicholas’s Kirk. And here is the link to the slightly less official but very exciting photos taken by Shona Duthie during the performance. (The white-haired gentleman visible in one of these photos is Mike Gibb, the lyricist who wrote the songs.)

I’ve had lovely emails and enthusiastic messages from a number of people who were there, and Mike reports: “Great performances and amazing audience reaction. Quite a few American and Canadians in the audience who were ecstatic about the whole thing. We were basically full for all three performances with SRO at the first.”

I have family visiting, so we celebrated modestly with a bottle (or two) of wine, and I played the songs for the assembled company from my laptop, showing the pictures from Aberdeen. Spontaneous applause, much admiration for Allan’s socks [g] (not sure that the ladies viewing them realized that he’s wearing ghillies with wrapped garters, rather than having a truly eccentric Argyll pattern decorating his ankles—hard to see fine detail on a laptop screen (well, and there was Rather a Lot of wine, too…), and a general hope that he grows his hair out longer before the next appearance. Sue’s and Allan’s vocals hugely enjoyed, and general raising of glasses to Mike, Kevin, and all the performers (being not limited to the actual stage, I could play them the whole song-cycle. We waited until the young men in the party (aged 17 to 26) went off to their own devices before playing “Say the Words” (the duet between Jamie and Black Jack Randall in Wentworth), though.)

Anyway, congratulations to all involved with OUTLANDER: The Musical!

Anyone wanting to check out song samples, or order a CD of the complete song-cycle, can do so here.

And now I must go and start packing for Scotland! So I’ll be scarce online for the next couple of weeks—might manage one more post before I leave– but will hope to come back with nice pictures.