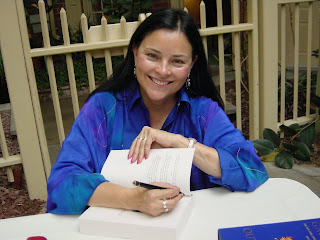 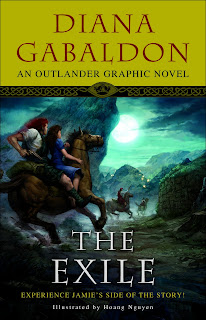 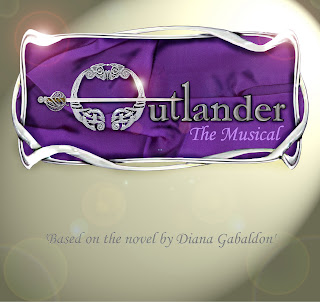 ONE WEEK AND COUNTING!! (September 21st!)

OK, time to get out the book-touring clothes and check for sweat stains…! (Well, yes, I do. Performing raises my body temp about five degrees, no matter what the ambient temperature is. I figure it’s all the energy pouring in from the audience. Y’all are great—and hot. [g])

Now that I’ve taken to Twittering (I’m “Writer_DG”), I notice that a few people seem to think that THE EXILE is just OUTLANDER done in pictures. If you’ve been following my blog for a bit, you’ll already know that’s not the case—EXILE is a brand-new story, though if you’ve read OUTLANDER (and I’m sort of figuring most of you have [cough]) you’ll recognize some of the main incidents.

You will, though, also have an all-new storyline, _and_ perhaps learn a few things people tell me they’ve wondered about from the original novel: Who was the mysterious girl in France? Where did Jamie get his mother’s pearls? What did Mrs. Fitz make of Claire’s bra? [g]

We sort of outgrew the confines of the bookstore with A BREATH OF SNOW AND ASHES, and so they hosted the last launch (for AN ECHO IN THE BONE) at the Biltmore Hotel—it was great! For this time, though—we have not only me and a pile of books [g], but also Hoang Nguyen, the wonderful artist who did the artwork, and we’ll be doing a knockabout cross-talk act…er…a collaborative program, I mean, in which we want to show you some of the cool art while we talk about it (explaining, for example, how we eventually came up with Jamie’s Butt), and that meant finding a venue where we could have good projection equipment and good seats for you to sit in while looking at it. (Though I must say that the imagination boggles a bit at the notion of an enormous projection of Jamie’s rear end…)

So. The Pen’s arranged to do this at the Scottsdale Center for the Arts, which has a lovely, brand-newly remodeled auditorium. And since we’re making such an Occasion of it, food and drink will be provided by Arcadia Farms. Aaaaand…

We’ll have music, courtesy of OUTLANDER: The Musical.

(As a Special Added Attraction, I _will_ read one or two excerpts from Book Eight. Just in case you were wondering how Jem’s doing in that tunnel, or What Jamie Said to Lord John next. [g] See below.)

Anyway, I expect a great time to be had by all, and hope to see y’all there, glowing like embers. [g] (I _will_ wear deodorant, in honor of the occasion.)

P.S. Since the launch party is in a special venue—which had to be rented for the occasion—there _are_ tickets for it. Each ticket includes the price of a signed book (it can be signed by me alone, by Hoang alone, or by both of us!)—and if you want to bring a friend, you can get a “companion” ticket for an additional $5. Book tickets here.

“Hey!” he shouted at the invisible ceiling. “Are there any bats up there?”
….

He’d been quite resigned to dying. Had expected it from the moment that he’d blurted out, “I have had carnal knowledge of your wife.” The only question in his mind had been whether Fraser would shoot him, stab him, or eviscerate him with his bare hands.

To have the injured husband regard him calmly, and say merely, “Oh? Why?” was not merely unexpected, but…infamous. Absolutely infamous.

“I did. And I should appreciate an answer.”
…